CMBG3 Law is saddened to learn of the passing of Ralph D. Gants, Chief Justice of the Massachusetts Supreme Judicial Court. Justice Gants reportedly died after suffering a heart attack earlier this month at the age of 65.

Justice Gants graduated from Harvard College in 1976, Cambridge University in England in 1979, and Harvard Law School in 1980. After law school, Gants was a law clerk for U.S District Court Judge Eugene H. Nickerson, then served as Special Assistant to the Director of the FBI before his appointment as Assistant U.S. Attorney for the District of Massachusetts, where he lead the Public Corruption Division. After a few years in private practice, Gants was appointed to the bench in in 1997 by Massachusetts Governor William Weld, serving on the Superior Court. He was appointed to the Supreme Judicial Court in 2008 by Governor Deval Patrick and subsequently elevated to Chief Justice in 2014, where he served until his death.

Justice Gants is renowned for his calm, personable demeanor, sharp intellect and passion for justice. He has long been an advocate for civil rights and equal justice in the court system. He was a tireless advocate for criminal justice reform and had spoken about racial disparity in the criminal justice system even before the resurgence of the Black Lives Matter movement and related calls for criminal justice reform. In Chief Justice Gants’ State of the Judiciary address in 2016, he spoke of the “great disparity in the rates of imprisonment among whites, African Americans, and Hispanics in this Commonwealth” and asked “how we can better fulfill our promise to provide equal justice for every litigant,” recruiting the assistance of Harvard Law School’s Criminal Justice Policy Program researchers to examine the issue, for which its report was issued just last week. In 2016, the SJC, under Gants, continued to recognize the role racial inequality plays in the justice system when it issued an opinion in a case involving the arrest of a black man who took flight from police, specifically noting that black males are disproportionately targeted for field interrogation such that a black individual’s flight from approaching police might be “motivated by the desire to avoid the recurring indignity of being racially profiled.” In June of this year, the Massachusetts Supreme Judicial Court, Led by Justice Gants, was the first state high court in the nation to acknowledge that systemic racism leads to the disparate treatment of African-Americans and recognize the role that the legal community must play “to make equality under the law an enduring reality for all.”

Justice Gants will be remembered for his zealous advocacy and numerous contributions to ensuring justice for all citizens of the Commonwealth of Massachusetts.   It is severely understated to observe that we will all miss Chief Justice Gants as a jurist, a citizen, and a man. 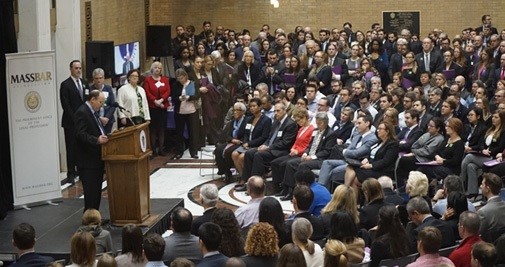 Justice Gants speaks before legal aid advocates, including CMBG3 team members, at the Walk to the Hill for Civil Legal Aid event in 2018